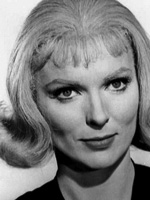 Jean Arless was one of the stage-names used by Joan Marshal. She made several film and Television appearances, and was the inspiration for the 1975 movie Shampoo written by her husband, director Hal Ashby.

She appeared in the following 6 episodes of Radio Mystery Theater

Joan Marshall (born Joan Schrepfermann; June 6, 1931 – June 28, 1992)[2] was an American film and television actress. She is best known for her appearances in The Twilight Zone's "Dead Man's Shoes", and Star Trek's "Court Martial". After appearing as a dancer in the film The Chicago Kid (1945) and in a part in the television series Have Gun – Will Travel (1958), she moved to California around 1959. In 1959 she reprised the role of Sailor Duval in the short-lived television series Bold Venture. She also appeared in may TV shows including Highway Patrol,77 Sunset Strip, Gunsmoke, he Jack Benny Program,"The Outer Limits", Petticoat Junction, The Munsters and many others, During the 1960s, Marshall frequently guest-starred on various television series, including Tales of Wells Fargo, Surfside 6, Hawaiian Eye, and The Jack Benny Program. She also appeared in the films Homicidal (using the stage name "Jean Arless") and Tammy and the Doctor opposite Sandra Dee and Peter Fonda. She also appeared in Looking for Love,The Happiest Millionaire,The Horse in the Gray Flannel Suit as well as Shampoo.

Reply
Jean Arless (also known as Joan Marshall, Joan Marshall Ashby, Joan Ashby, Joan Marshall Bartfield and Joan Bartfield) had over 50 appearances in film and television, including the Twilight Zone, the Outer Limits, Star Trek and the original pilot of The Munsters as Phoebe Munster, being eventually replaced by actress Yvonne De Carlo as Lilly Munster. The film Shampoo (in which she appeared) was loosely based on her life story. She is remembered for her dual role in the 1961 William Castle cult classic film, Homicidal, playing the female role of Emily and the male role of Warren.