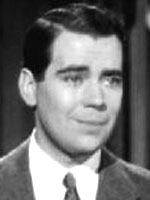 Elliot Reid was an announcer for CBS radio at the age of 17. He is remembered for his work on Suspense! and played Jane Russell's suitor in Gentlemen Prefer Blondes.

He appeared in the following 6 episodes of Radio Mystery Theater

On April 8th, 2006 my wife and I were fortunate to have had lunch with "Tim" Reid, as his badge read, when we attended a radio program recreation in Van Nuys, California. During the conversation at the table of eight, one woman asked if he was related to the actor Elliot Reid. "That's me," he answered. My wife was seated between us so I took a closer look and, in spite of the changes brought on by time, I pictured him with his hairpiece and realized I was in the presence of the same guy who appeared opposite Marilyn Monroe in Gentlemen Prefer Blondes! It was a thrilling moment for me. My good friend of many years, June Foray, who was part of the show, had told me I shouldn't miss the event and I'm glad we went. When you're surrounded by legends like Robert Easton, Janet Waldo, Chuck McCann, Marvin Kaplan, Herb Ellis and many others it's hard to define what moment left the biggest impression but chatting with Tim was definately the highlight of the day. I know...I dropped a lot of names but everytime I turned around it was someone else who's contributions to entertainment were outstanding. That was a day I'll never forget.

Reply
That's neat he was a good actor. When I was at Wyoming Tech in 77 we could listen to EG Marshall at night.

Reply
Elliot Reid started in radio in the 1930s as an announcer for CBS at the age of 17. He appeared in dozens of radio programs including The Mercury Theatre on the Air, The Adventures of Philip Marlowe and Suspense. He appeared in a number of Broadway productions and had over 100 appearances in film and television including TV's I Love Lucy, The Munsters, the Odd Couple, All in the Family and Seinfeld. His film credits include a number of Disney pictures, Inherit the Wind and Gentlemen Prefer Blondes.