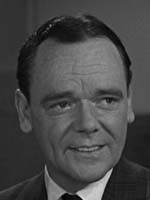 James McCallion was born on September 27, 1918 in Glasgow, Scotland. He was an actor, known for National Velvet (1960), Kiss Me Deadly (1955) and Vera Cruz (1954). He appeared in films, TV, radio and the legitimate theater for five decades. A resident of Studio City, McCallion began acting as a boy of 7 and newly arrived from Londonderry, where he was born. It was a role on Broadway in "Yours Truly" with Leon Errol. The radio show "Billy and Betty" and two other roles on Broadway, "Roosty" and "But for the Grace of God," brought him to Hollywood's attention, and in the late 1930s, he was seen in such films as "Code of the Streets," "Boy Slaves" and "Pride of the Blue Grass." After World War II Army service he came back to films in "Illegal" with Edward G. Robinson, "Vera Cruz" with Burt Lancaster and Gary Cooper, "Tribute to a Bad Man" with James Cagney and "North by Northwest" with Cary Grant. In "PT 109" he portrayed Pappy McMahan, the severely burned sailor whom Navy Lt. John F. Kennedy pulled to safety after the boat commanded by the future President was rammed by the Japanese during World War II. His television credits included "Playhouse 90," "Philco TV Playhouse," "General Electric Theatre," "Gunsmoke," "Streets of San Francisco," "Barnaby Jones," "Cannon," "The Fugitive" and "Hawaiian Eye."

Reply
James McCallion had a 40+ year career as an actor in radio. He had a number of appearances on Broadway and had over 100 appearances in film and television. In radio, he appeared in dozens of radio shows including the Cavalcade of America, the Mysterious Traveler, Broadway is My Beat and Yours Truly Johnny Dollar. His television appearances include Alfred Hitchcock presents, the Twilight Zone, the Outer Limits, the Invaders and Night Gallery. His film appearances include PT 109, Coogan's Bluff and the Alfred Hitchcock classic, North by Northwest.