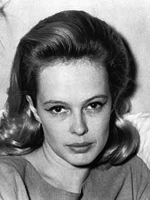 Sandy Dennis worked in stage and film actress. She won the 1966 Academy Award for Best Supporting Actress in Who's Afraid of Virginia Woolf?

I am an enormous fan of the late Sandy Dennis. However, she belonged in front of the camera. She was a MOVIE STAR. In Snake In The Grass, the poor woman was nervous, sounded as if she were reading through the entire script, and failed to give a good performance. However, I will sit and watch any film she ever made. She was great on film.

Reply
I loved Sandy Dennis. She was always so weird. Her voice was the greatest!

Reply
I can see how it might sound like she was nervous and stilted in this genre, but I took it another way. As a scientist, she is a concrete thinker and in control of her environment Her character WAS nervous and she may have played it choppy as she tried to process what was happening to her like working through a lab check off. Her monotone at times voice may have reflected attitude over having to defend her dignity at someone not always trusting someone as esteemed as she felt she should be.

Reply
amazing voice.love/miss her to this to this day

Reply
Sandy Dennis appeared in a dozen different Broadway productions and 50 films and television programs including the films, Splendor in the Grass, the Out of Towners, Sweet November and Who's Afraid of Virginia Woolf? for which she won the 1966 Academy Award for Best Supporting Actress.