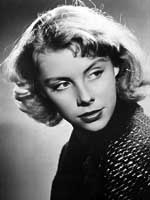 Betsy von Furstenberg made many appearances on Broadway. She appeared on TV's Alfred Hitchcock Presents & for a short time play Lisa Grimaldi on As the World Turns.

Reply
Betsy von Furstenberg (August 16, 1931 – April 21, 2015) was a German-born American radio, television, film, and Broadway actress Von Furstenberg, who studied acting in New York at the Neighborhood Playhouse under the renowned teacher Sanford Meisner, performed in a wide range of productions on Broadway for 25 years On American television, von Furstenberg appeared in more than two dozen weekly series and made-for-TV movies between 1951 and 1980. In 1958 she memorably starred opposite Robert Horton on the anthology series Alfred Hitchcock Presents, portraying a double-crossing young widow in "The Disappearing Trick". Earlier that same year, she also appeared in the Have Gun - Will Travel episode "Girl from Piccadilly". Much later, in 1980, von Furstenberg performed the role of Lisa Grimaldi on the popular soap opera As the World Turns, serving for months as a replacement for actress Eileen Fulton, who had left the daytime drama reportedly due to illness.[11] As the World Turns was not the only soap opera in which von Furstenberg appeared. She was also cast in the role of Niele Neeves on The Secret Storm and as "The Duchess of Essex" in Another World.

Reply
Actress, author, model and dancer Betsy von Furstenberg appeared in over a dozen Broadway productions and had numerous film and television appearances. Originally born "Countess Elizabeth Caroline Maria Agatha Felicitas Therese von Fürstenberg-Herdringen" in Westphalia, Germany, she and her parents soon left for New York. She was tutored in dance starting at the age of four and by age seven she was already performing with the American Ballet Theatre. When she was 14, she began working as a fashion model. She studied acting in New York at the Neighborhood Playhouse under the renowned teacher, Sanford Meisner, and she performed in a wide range of productions on Broadway for over 25 years. Her film credits include Women Without Names and Loving. Her television credits include Have Gun - Will Travel, Alfred Hitchcock Presents, One Step Beyond, The Defenders and The Ed Sullivan Show, but she is best remembered for her roles on the daytime soap operas, the Secret Storm, the Doctors, Another World and As The World Turns. In 1988, she published Mirror, Mirror, a novel centered on an heiress pursuing love among Europe's elite social circles.