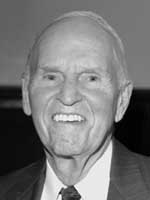 George Furth made his professional stage debut in 1961. He often collaborated with Stephen Sondhiem. He was a character actor in many movies and television roles.

George Furth was a playwright and actor who wrote numerous plays and librettos, and acted in a number of Broadway productions. He won a Tony award for writing Company, a 1970 musical comedy with music and lyrics by Stephen Sondheim. He had appearances in over 100 films and television programs. His film credits include Tammy And The Millionaire, The Boston Strangler, Butch Cassidy And The Sundance Kid, Sleeper, Blazing Saddles, Shampoo, Airport '77, The Cannonball Run and The Man With Two Brains. His television credits include The Alfred Hitchcock Hour, McHale's Navy, Batman, F Troop, The Monkees, I Dream Of Jeannie, Night Gallery, Green Acres, Bonanza, The Odd Couple, Happy Days, All In The Family, and his reoccurring role on Mary Hartman, Mary Hartman.