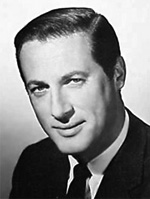 Lloyd Bochner began appearing on Ontario, Canada radio at the age of 11. He played many suave, rich leading men during his career.

Reply
Lloyd Bochner had an almost 60 year acting career, appearing in radio, on Broadway and in film and television. He was a staple of television sitcoms and dramas with almost 250 different roles in movies and television, including his reoccurring role as Cecil Colby on the nighttime soap, Dynasty, but he will always be best remembered for his role in the Twilight Zone episode, "To Serve Man".

Reply
When he appeared on a TV show you knew who the bad guy was! He parodies his own famous role in Naked Gun 2.5

Reply
In a career that spanned nearly 7 decades, prolific character actor Lloyd Bochner worked in radio and on stage, but it was his appearances in over 250 films and television programs that constituted the bulk of his acting work. Like many other actors in the 1930s, he got his start in radio, appearing on Ontario, Canada radio programs starting at the age of 11, and went on to appear in a number of old time radio programs including The Chase and The Sears Radio Hour. During the 1950s, he appeared in a number of Broadway productions as well. His film credits include Drums Of Africa, The Night Walker, Point Blank, Tony Rome, The Dunwich Horror, Ulzana's Raid and The Horse In The Grey Flannel Suit. His television credits include Boris Karloff's Thriller, Perry Mason, Bonanza, Hogan's Heroes, Bewitched, Columbo, Charlie's Angels, multiple appearances on The Love Boat and Fantasy Island, his reoccurring role of Cecil Colby on the night time soap opera, Dynasty and of course, his unforgettable role in the Twilight Zone episode, To Serve Man. He also did voice acting work in a number of animated series including the Batman franchise.

Reply
He played a lot of bad guys & His voice and mannerisms made him a wonderful bad guy.