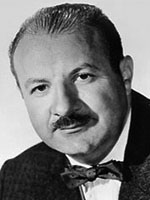 Lou Jacobi began acting and doing stand-up comedy in his native Canada before moving to the London stage. He came to Broadway in 1955.

Lou Jacobi (born Louis Harold Jacobovitch, December 28, 1913 – October 23, 2009) was a Canadian character actor. Lou began acting as a boy, making his stage debut in 1924 at a Toronto theater, playing a violin prodigy in The Rabbi and the Priest. After working as the drama director of the Toronto Y.M.H.A., the social director at a summer resort, a stand-up comic in Canada’s equivalent of the Borscht Belt, and the entertainment at various weddings and bachelor parties, Jacobi moved to London to work on the stage, appearing in Guys and Dolls and Pal Joey He was an actor, known for Irma la Douce (1963), Everything You Always Wanted to Know About Sex * But Were Afraid to Ask (1972) and I.Q. (1994) He has appeared in the following TV Series: L.A. Law, Great Performances, ABC Weekend Specials , Melba, Comedy Factory, St. Elsewhere , Cagney & Lacey , Sanford and Son , Barney Miller, Love, American Style, and others. He guest-starred on such television shows as Playhouse 90,Too Close For Comfort,Tales From The Darkside, Love, American Style, That Girl and The Man From U.N.C.L.E., and was a regular on The Dean Martin Show. In the summer of 1976, Jacobi was the star of a CBS comedy series Ivan the Terrible, in which he played a Russian headwaiter living with nine other people in a small Moscow apartment He was also appeared in these TV Movies: The Rear Guard, Better Late Than Never , Off Your Rocker , Deep Dish TV and others

Reply
Lou Jacobi appeared in numerous Broadway productions and in over 80 films and television programs including the stage and film versions of the Dairy of Anne Frank and the film Irma la Douce. His numerous TV appearances include 5 episodes of Love American Style.

Reply
Lou Jacobi appeared in numerous Broadway productions and in over 80 films and television programs including the stage and film versions of the Dairy of Anne Frank and the film Irma la Douce. His numerous TV appearances include 5 episodes of Love American Style.

Reply
I miss a lot of the actors from back then, Hollywood defiantly needs a good actor to come along there aren't many left. I remember a time when there was a movie of the week

Reply
RMT came on at 11pm at night and my bedtime was 10pm so I'd lay awake for an hour anticipating when I can turn on the radio really low so Dad wouldn't hear, then I'd lay in bed very still and listen. That creaky gate noise always freaked me out. I loved it!

Reply
So many people have said this. Same here! I was 9, we had just moved to my Dad's hometown. He had started collecting toy trains, and would work on them in his basement shop, while listening to CBSRMT. This was in 1974, when it started. I would listen with him, but sometimes listen on my little radio in my room after went to bed.