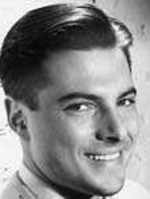 Donald Buka played several supporting roles in TV and Movies. He made appearances on TV's Dragnet, Ironside, and High Chaparral.

Just saw him the first time in an episode of Alfred Hitchcock. His appearence was brief, more like a cameo towards end of episode. Didn't catch title of episode. Was good looking psychopath.

Reply
Donald Buka had a 40+ year entertainment career in radio, on Broadway and in film and television. On radio, he appeared on dozens of programs including, Inner Sanctum Mysteries, The Cavalcade Of America, Dimension X, The Mysterious Traveler, X-Minus One and Theater Five. He appeared in numerous Broadway productions and in over 70 films and television programs. His film credits include Watch On The Rhine, The Street With No Name, Vendetta and Shock Treatment. His television credits include the horror and scifi classics, Suspense, Lights Out, One Step Beyond, Tales Of Tomorrow, X-Minus One and Alfred Hitchcock Presents, along with Perry Mason, Gomer Pyle U.S.M.C., The Equalizer and the daytime soap operas, The Doctors and All My Children.