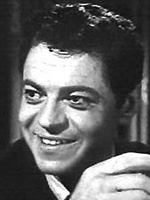 Ross Martin is best remembered for the role of Artemus Gordon on the Wild Wild West TV series.

One of the finest actors of our time! We lost him way too young. The Wild Wild West certainly would not have been the same without him, and he's done an excellent job in these two CBS RMT shows. Now if anyone knows where I can find his radio show "The Ross Martin Show" that would be wonderful! :)

Reply
Not only would I,also,love to find any episodes of"The Ross Martin Show"radio show from the very early-40's..but i'd also love to find any of his late-1940's to very early-1950's live televison shows(1948-1953)-his appearances on "Lights Out"(his episodes from 1949 to 1951),and his featured-starring role on"The Storm"-which was the very first debut episode of Westinghouse-Studio One live-television program,from 1948,and his two 1953 "Suspense"live-television episodes..and lots of other live-television anthologies that he did in the very early-1950s. Ross Martin's very impressive acting role that he did in one of my favorite Twilight Zone episodes-called "The Four Of Us Are Dying"(1960) is probably the closest you'll get to seeing just exactly the kind of 1949 to 1952 live-television performances he did-and as close as you'll get to just the kind of live-television anthology sgows he acted in-back in the late-40s &early-50s..since most all the old Twilight Zone anthology episodes all had a very early-50s live television look and feel-which is why that sgow will never get old! Now all I have to do is find as many of those Ross Martin late-40s and early-50s live television shows he was in ---hopefully all on DVD! Wish me luck!!! Fred

Reply
Ross Martin (born Martin Rosenblatt, March 22, 1920 – July 3, 1981) was a Polish-born American radio, voice, stage, film and television actor. Martin was known for portraying Artemus Gordon on the CBS' Western series The Wild Wild West, which aired from 1965 to 1969. He was partners in a comedy team with Bernie West for several years, then appeared on many radio and live TV broadcasts before making his Broadway debut in Hazel Flagg in 1953. Martin's first film was the George Pal 1955 production Conquest of Space, followed by a brief but memorable appearance in The Colossus of New York (1958), as the scientist father of Charles Herbert. In 1959, Martin appeared in the episode "Echo" on Alcoa Presents: One Step Beyond. He appeared in two 1959 episodes of David Janssen's crime drama series, Richard Diamond, Private Detective. Soon after, he caught the eye of Blake Edwards who cast him in a number of widely varied roles; as Sal in the 1959 Peter Gunn episode "The Fuse", his breakout role as the comic sidekick Andamo in the 1959 CBS drama series Mr. Lucky, the asthmatic kidnapper Red Lynch in the 1962 thriller Experiment in Terror, culminating with a role in The Great Race, as the smoothly villainous Baron Rolfe Von Stuppe. He was also a regular on Stump the Stars from 1962-1963. He was the voice of Doctor Paul Williams in 1972's Sealab 2020, additional characters in 1973's Butch Cassidy and the Sundance Kids, and additional character voices in 1978's Jana of the Jungle. After The Wild, Wild West ended, Martin continued his career in various guest roles on television and in roles in television films. In 1970, Martin portrayed Alexander Hamilton in the NBC television special Swing Out, Sweet Land, hosted by John Wayne. He also appeared in a 1970 episode of The Immortal ("White Elephants Don't Grow on Trees"). The following year, Martin tried his hand at directing. He guests starred in the 1971 episode of Columbo entitled "Suitable For Framing", as a murderous art critic and also a 1971 episode of Love, American Style, which he also directed. Martin directed another episode of the series in 1973. Later that same year, he appeared as the famed Asian detective Charlie Chan in The Return of Charlie Chan. He made a guest appearance on Barnaby Jones in 1974, and also lent his voice to an episode of Wait Till Your Father Gets Home later that year.

Reply
Master of dialect, Ross Martin was fluent in Polish, Yiddish, Russian, French, Spanish and Italian. He appeared on radio, starting in the 1940s on numerous programs including The Cavalcade Of America, John Steele Adventurer, Dimension X, Cloak And Dagger and X-Minus One. He appeared on Broadway and in nearly 200 films and television programs. His film credits include Conquest Of Space, The Colossus Of New York, Experiment In Terror and The Great Race. His television credits include The Twilight Zone, Gunsmoke, Bonanza, Night Gallery, Columbo, Sanford And Son, Charlie's Angels, The Love Boat and Fantasy Island, but he is of course best remembered for his role of Artemus Gordon on the Wild Wild West. As a voice actor, he appeared in numerous animated series including Gulliver's Travels, Jana Of The Jungle, Dinky Dog, Sealab 2020 and Wait Till Your Father Gets Home.

Reply
Outstanding work! I'm the biggest fan of Ross...I just love his stuff. No surprise i'm a huge fan of Wild Wild West, TZ, Night Gallery, and CBSRMT. Great to have one of my favorite actors in so many of my favorite shows!