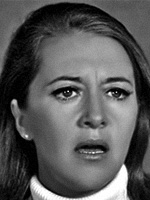 Joanne Linville has made many guest star appearances on TV. She was a Romulan Commander on the original Star Trek series.

Beverly Joanne Linville (born January 15, 1928) is a retired American film and television actress. In 1959, Linville appeared on the long-running CBS daytime drama The Guiding Light as Amy Sinclair. Joanne made her mark on television from the 1950s-'80s, appearing in such respected anthology series as Studio One in Hollywood (1948), Kraft Theatre (1947) and Alfred Hitchcock Presents (1955), among others. She starred in two television presentations of One Step Beyond— as Aunt Mina in the episode "The Dead Part of the House" (1959), and as Karen Wadsworth in the episode "A Moment of Hate" (1960). In 1961, she starred in the Twilight Zone episode "The Passersby". In 1968, she played the Romulan commander in the Star Trek episode "The Enterprise Incident". Other television appearances include Decoy, Alfred Hitchcock Presents, Have Gun Will Travel, Coronado 9, Checkmate, Adventures in Paradise, Empire, Gunsmoke (three episodes), Dr. Kildare, Ben Casey, Route 66, The Eleventh Hour, I Spy, Bonanza, The Fugitive, The F.B.I. (two episodes), The Invaders (two episodes), Felony Squad, Hawaii Five-O (three episodes: season one - "Once Upon a Time", parts I and II; season two, "Kiss the Queen Goodbye"), Kojak, Columbo: Candidate for Crime, The Streets of San Francisco (two episodes), Nakia, Switch, Charlie's Angels, CHIPS, Mrs. Columbo, Dynasty, and L.A. Law and MANY OTHERS. Linville and actress Irene Gilbert co-founded the Stella Adler Academy in Los Angeles in 1985

Reply
Joanne Linville appeared on Broadway and has had over 80 appearances in film and television, including the Twilight Zone, Alfred Hitchcock Presents, Bonanza, Gunsmoke and Columbo, but is best remembered as Mr.. Spock's love interest, the Romulan Commander on the original Star Trek series.

Reply
Joanne Linville was on hand during her daughter's performance. On the "Star Trek" episode, "The Enterprise Incident", Joanne Linville played the Romulan Commander. On the web series, Star Trek Continues (which I HIGHLY recommend), Joanne Linville's daughter Amy Rydell stepped into her mother's shoes (and ears...lol) to play the role. The resemblance is uncanny.