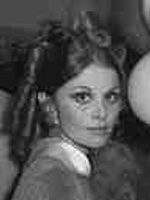 Lynn Loring began appearing on Search For Tomorrow at age 11. She appeared in several series but gave up acting in 1975 to pursue a career in production.

Ms. Loring acted in 2 of my favorite episodes. Her skillful acting most definitely contributed to both these episodes being so memorable.

Reply
Lynn Loring (born Lynn Zimring; July 14, 1944) is an American actress and television and film producer. Loring started acting in 1951 at the age of seven, playing the role of Patti Barron in the television soap opera Search for Tomorrow. She remained in the role for ten years, until she graduated from high school in 1961, after which she explored other opportunities, including appearances in films such as Splendor in the Grass (1961) and Pressure Point (1962). Loring played Barbara Erskine, the daughter of Inspector Lewis Erskine during the first season (1965-1966) of The F.B.I. She appeared on TV episodes of Perry Mason, The Alfred Hitchcock Hour, The Big Valley, The Wild Wild West, The Man from U.N.C.L.E., The Eleventh Hour, Daniel Boone, Return to Peyton Place, and The Mod Squad. n 1975, she discontinued acting in favor of a career in production, of both made-for-TV movies and feature films such as Mr. Mom (1983). In 1979, Loring worked as the casting director for a TV movie, "Raid on Coffeyville". She shifted into producing and, for several years, had an initially fruitful partnership with Aaron Spelling. In the late 1980s, she assumed the presidency of the prestigious "MGM/UA Television Productions". Loring, then only in her 40s, was one of the first women to hold such a high-ranking role in Hollywood

Reply
Today is actress Lynn Loring's birthday. She just turned 77 years old. She appeared in 2 episodes of CBS Radio Mystery Theater. Child actress Lynn Loring began her career at age 6 and is best remembered for her 10 year role of Patti Barron on the TV soap, Search For Tomorrow. Other television credits include Perry Mason, Gunsmoke, Daniel Boone, Bonanza, The Wild Wild West and My Three Sons. She appeared on radio in such shows as Let's Pretend, The CBS Radio Workshop and Suspense. Her film credits include Splendor In The Grass, Pressure Point and Journey To The Far Side Of The Sun. In 1975, after more than 50 appearances in film and television, she gave up acting and turned to a career in production, partnering with Aaron Spelling. In the late 1980s, she assumed the presidency of the prestigious "MGM/UA Television Productions. And from 1967 to 1984, she was married to CBSRMT alumni Roy Thinnes.

Reply
OMG, she was the greatest as simple, naive Amy in Having A Horrible Time! She was great as the psycho lesbian in Police Woman. I loved her as the minister's wife in Black Noon. That movie scared the Bejesus out of me when I was a kid.