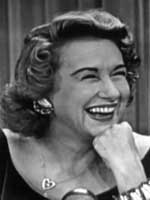 Arlene Francis was hosted the radio program Blind Date and was a long time panelist on TV's Whats My Line.

Arlene Francis (born Arline Francis Kazanjian; October 20, 1907 – May 31, 2001) was an American actress, radio and television talk show host, and game show panelist. She is known for her long-standing role as a panelist on the television game show What's My Line?, on which she regularly appeared for 25 years, from 1950 through the mid-1970s, on both the network and syndicated versions of the show. Francis became a well-known New York City radio personality, hosting several programs. In 1938 she became the female host of the radio game show What's My Name?; although several men appeared as co-hosts over the years, Francis was the sole female host throughout the program's long run (on ABC, NBC and Mutual networks) until it ended in 1949. In 1940 Francis played Betty in Betty and Bob, an early radio soap opera broadcast. In 1943, she began as host of a network radio game show, Blind Date, which she hosted also on ABC and NBC television from 1949–52. She was a regular contributor to NBC Radio's Monitor in the 1950s and 1960s, and hosted a long-running midday chat show on WOR-AM that ran from 1960 to 1984. he appeared on other game shows, including Match Game, Password, To Tell the Truth, and other programs produced by Mark Goodson and Bill Todman, including a short-lived hosting stint on Goodson-Todman show By Popular Demand replacing original host Robert Alda

Reply
Arlene Francis had a 40 year career in radio, both acting in and hosting numerous radio programs including, the Cavalcade of America, Betty and Bob and the Mercury Theater. She had roles in 27 Broadway productions and appeared in over 80 films and television programs, most of which were game shows and talk shows. She is best remembered for her 25 year run as a panelist on the popular game show, Whats My Line. She was nominated for 2 Emmy awards.

Reply
Arlene Francis wasn't your typical pin up beauty but she was so nice and so likable. She was gracious and kind. All that made her a true beauty.