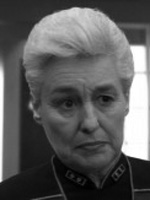 Jacqueline Brooks is currently a teacher at the Circle in the Square Theatre School.

Jacqueline Victoire Brookes (July 24, 1930 – April 26, 2013) was an American film, television, and stage actress, best known for her work both off and on Broadway. uring the 1960s, she spent several summers acting in the Shakespeare Festival at the Old Globe Theater in San Diego, performing in such plays as Antony and Cleopatra, A Winter's Tale, The Merchant of Venice, A Midsummer Night's Dream, The Merry Wives of Windsor, and Richard III. During that era, she also performed Rosalind in As You Like It at the New Mexico State University, Katherine in The Taming of the Shrew at the University of British Columbia, and Beatrice in Much Ado About Nothing, at the Shakespeare Festival in Stratford, Connecticut. Jacqueline Brookes in later years was a teacher at the Circle in the Square Theatre School, as well as a life member of The Actors Studio She appeard in the following As the World Turns (1969–1973),The Gambler (1974),Ghost Story (1981),Without a Trace (1983),American Playhouse (1987),Law & Order (1990),The Naked Gun 2½: The Smell of Fear (1991),Star Trek: The Next Generation (1992) (Episode: The First Duty),The Good Son (1993),Losing Isaiah (1995)

Reply
Jacqueline Brookes had a 60+ year entertainment career, with numerous appearances on Broadway and in over 50 films and television programs. Her television credits include Lou Grant, Miami Vice, The Equalizer, Star Trek: The Next Generation and Law And Order, but she is best remembered for her work on the daytime soap operas, The Secret Storm, Another World, Ryan's Hope, All My Children, and her longtime role of Miss Thompson on As The World Turns. Her film credits include The Werewolf Of Washington, Ghost Story, The Entity, License To Kill, Sea Of Love and The Naked Gun 2 1/2: The Smell Of Fear.

Reply
OMG!!! She did so many things, but she was brilliant as the defense attorney on A Death In Canaan. She was intelligent looking and sounding! That gray hair and deep voice were IT for her!!!!