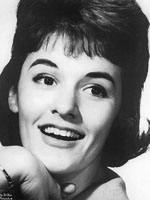 Marcia Rood is known for offbeat comedies. She has appeared on stage, film, and made for TV movies.

Marcia Rodd (born July 8, 1940) is an American actress. She appeared in 1 episode of Radio Mystery Theater. Rodd spent the 1960s appearing on Broadway in such plays as Neil Simon's The Last of the Red Hot Lovers. In 1971, she appeared in the drama film T.R. Baskin with Candice Bergen and the black comedy Little Murders opposite Elliott Gould. Her other film credits included roles in Handle with Care (1977) and Last Embrace (1979). During the 1970s, she appeared in several made-for-television productions, and continued making appearances on television shows through the next three decades. Some of these shows include The New Dick Van Dyke Show, All in the Family, Barnaby Jones,Phyllis, Maude, ABC Afterschool Special, Quincy, M.E., Archie Bunker's Place, Laverne & Shirley, The Young and the Restless and many others One of these appearances was as Carol Traynor, the role later played by actress Adrienne Barbeau in an episode of All in the Family which was the pilot for the subsequent series, Maude. (She had also played another character on a previous All in the Family episode, "Mike's Mysterious Son", earlier that same season.) She also made an appearance on the series M*A*S*H as Captain Lorraine Anderson, a nurse who was a former classmate of Major Margaret Houlihan he also had a recurring role as E.J. Riverside, Stanley Riverside's wife, on Trapper John, M.D. She appeared in the following films Little Murders(1971), Mulligans!(1997) , Shining Seas(2015) as well as others

Reply
Marcia Rodd has had an illustrious entertainment career with appearances in over a dozen on and off Broadway productions and in over 80 films and television programs, receiving one Tony award nomination for her performance in Shelter. Her film credits include Little Murders, Handle With Care, The Scottish Tale and American Christmas. Her television credits include All In The Family, Maude, M*A*S*H, Laverne And Shirley, Night Court and The Young And The Restless. She continues to work, with her latest appearance being on Grey's Anatomy in 2020.