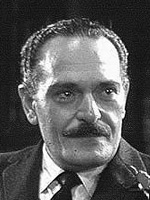 Joe DeSantis started in Radio on Pepper Young's Family, and appeared on Mr. District Attorney, March of Time, Gangbusters, Kate Smith, and many others.

He appeared in the following 3 episodes of Radio Mystery Theater

Joe DeSantis' prolific career started in radio, with appearances on such programs as Suspense, X Minus One, the Mysterious Traveler, Dimension X, Pepper Young's Family, Mr. District Attorney, March of Time, Gangbusters, the Kate Smith hour, and many others. He appeared in over a dozen Broadway productions and had appearances in over 160 films and television programs. His TV credits include Tom Corbett, Space Cadet, Lights Out, X-Minus One, Inner Sanctum, Alfred Hitchcock Presents, Perry Mason, Boris Karloff's Thriller, The Outer Limits, The Munsters, Gunsmoke, Bonanza, Hawaii Five-O, Mission: Impossible, Mannix and dozens more. His film credits include The Man With A Cloak, The Unholy Wife, Deadline U.S.A., Al Capone, A Cold Wind In August, Madame X, Beau Geste, The Professionals and The Venetian Affair.

Reply
I loved his appearance on The Munsters! Great actor!

Reply
Once you recognize him, it's amazing how much he did. I'll always call out "Joe!" when I see him on Rawhide or Mason or one of the other shows I grew up with in the 60s (and still watch).